Producing a believable narrative with relatable issues in a game can be somewhat difficult. This is a far greater challenge in a game that takes place in a seemingly alternative reality in the near future. Deus Ex: Mankind Divided excels at placing the player back in the Cyberpunk world that Deus Ex: Human Revolution helped introduce to new fans of the Deus Ex series while still appealing to fans of the original games. Player choice combined with the stealth or loud approach topped off with strong RPG elements make this game worth the delay (s) it endured. Much like last year’s Metal Gear Solid V: The Phantom Pain, Deus Ex: Mankind Divided stresses player choice regarding gameplay, but unlike Metal Gear player decisions also have more impact on the story and sub plots.

Level design in Mankind Divided is better than ever. Various routes throughout the game allow for decisions to be made when it came to traversing the in game world. How the player traverses it, whether with stealth or a more ‘direct’ approach is all up to the player most of the time. However, for myself personally the non lethal approach is far more rewarding. This takes more time obviously and some more thought but honestly it is worth it. Verticality is fare more prevalent in this iteration of the franchise. Some areas or hazards such as laser grids or mines can only be dealt with through various upgrades to Adam Jensen, the protagonist. The fantastic plus to various means of traversal are the rewards you can find in various routes. It kept me constantly aware of various routes and I back tracked at times to check areas i either bypassed or sneaked by in entirety. There are tons of areas that may lead to small sub-quest that are easily missed. The quests are not really boring either so don’t expect simple fetch quests/missions. Small engagements ranging from simple dialogue to emails may also help present a sub-quest to the player in an organic fashion.

The gameplay gravitates to first person perspective although third person shots are also present while in cover or during some conversations. Adam Jensen looks as badass as ever and with the new cover to cover system and mantling he moves far more naturally (even for someone with augmentations). The UI has been overhauled as well, notifications in general are far more visible to the player. Stealth in a sense is easier now due to the changes regarding combat and new augmentations make the game seem easier but with greater power to the player means that greater challenges are in store. The game expects the player to be aware of this. It isn’t quite as hands free as Metal Gear Solid V for references but it certainly does not hold your hand at times. 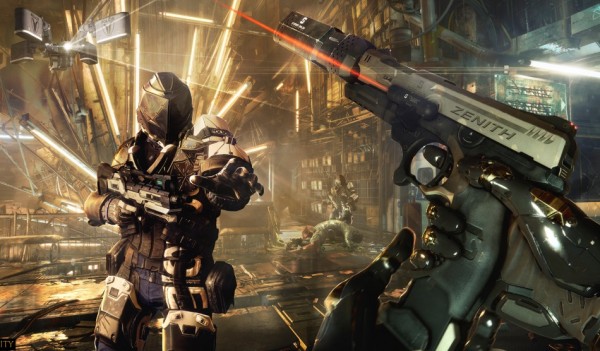 Gunplay specifically feels right finally when compared to Human Revolution. On the fly modifications can make a normally single use gun such as an assault rifle function like a battle rifle or designated marksmen rifle with the right modifications (well only if you don’t feel like using the actual battle rifle). My one gripe with the gunplay in general is the lack of movement Adam’s hands actually make while shooting. It is just one tiny little detail but he has augmentations so maybe while shooting he has suction grip like hands. The level of improvement when compared to Human Revolution is so noticeable, that in Mankind Divided i never strayed away from using my arsenal simply because for once it was not clunky.

The synthesis of both the gameplay mechanics regarding combat and RPG elements such as dialogue truly help immerse ones self. One player may experience a relatively non-violent encounter with a sketchy individual. Other players may meet the same individual, exhaust a few line of dialogue, become frustrated with the NPC and kill them. In Mankind Divided that is completely okay, although make sure violent tendencies stay in your video game playthroughs. An example of this for me was an encounter with a con artist that was impersonating a State Police officer. He was scamming people with augmentations into buying forged identification passes/cards that actually did not even work. After dispatching his men at the location where he was having a young woman make the cards I went back to meet him and confront him. Needless to say things went sideways and a fake State Police officer ended up face down in the alley next to his checkpoint. That was how I handled that specific situation, Mankind Divided allows for player choice which i cannot stress over enough.

The game runs incredibly well on my PC but I cannot speak for the console version since I have yet to play it on PS4 or Xbox One. The new game engine handles lighting and large crowds far better than the previous title. I was able to maintain a steady framerate of 60 throughout the entire experience except for some cut-scenes that appear to be locked at 30 due to being pre-loaded onto the game’s file directory as a video file. The game only crashed once for me personally, although a recent patch fixed that on my end.

Gameplay and level design aside Deus Ex: Mankind Divided attempts to portray discrimination not through race but through natural humans and those with augmentations. The game both succeeds and fails at doing so. Essentially after an event two years ago simply called the ‘Incident’ that caused people with augmentations to go into a violent rage the world, being the majority of humans that do not have augmentations are afraid that a similar incident will occur again. Thus augs (people with augmentations) are treated like second class citizens due to a combination of fear, hate, distrust, you get the idea. People with prosthetics are forced to carry extra identification, ride in separate train cars, and for the  vast majority of augs live in selected housing. Sound similar? Well it is even more obvious when topped off with the constant police harassment (IE beatings, threats, etc).

Where the game fails to show off the “Mechanical Apartheid”  (note I did not coin the term, the marketers for the game did) is the fact that besides police harassment and a few threats with some physical encounters sprinkled in the player will hardly have to endure cruelty on a scale compared to the real life situations and time periods this is attempting to mirror. Sure the player as Adam, someone who has a ridiculous amounts of prosthetics is treated poorly, but it hardly compares to the treatment of other augs in the game. Part of this is due to the fact that Adam works for an international counter terrorism unit and therefore has higher clearance identification than the common aug. Even though the player is essentially looking at this in game social issue through a hypothetical window, the game still made me feel uncomfortable due to the discrimination in game. What I encountered in game and felt personally is probably regarded by others as an over analysis of a back drop theme to a video game. However, I have never felt as uncomfortable for my player character in a video game based off of a physical trait as I have in Mankind Divided.

The second class treatment and forcing of augs to live in awful parts of the in game city of the real life location of Prague combined with all of the discrimination made me feel uncomfortable at times in a VIDEO GAME. This is why i repetitively stress the importance the medium as a whole has for telling stories and attempting to semi-immerse the player into something they may or may not have experienced before. My point is i felt uncomfortable in a video game sitting in my dorm, I cannot imagine the plight specific individuals have to go through in real life regarding discrimination and or societal bias. Yet, after playing this game one thing I can take away is that I sympathize with groups of people targeted due to various traits even more. It is worth mentioning i already did but I never experienced any form of discrimination in real life. I more than likely never will so dealing with this kind of harassment furthers my understanding as to how uncomfortable it makes someone feel (and this was just in a game not in REAL LIFE). Now it is worth mentioning I am not equating anything i encountered or felt mentally about in the game can even compare to the real life treatment of groups treated as a minority. The video game medium as a whole is at the moment the closest way for me to observe any kind of treatment as one, albeit in game. 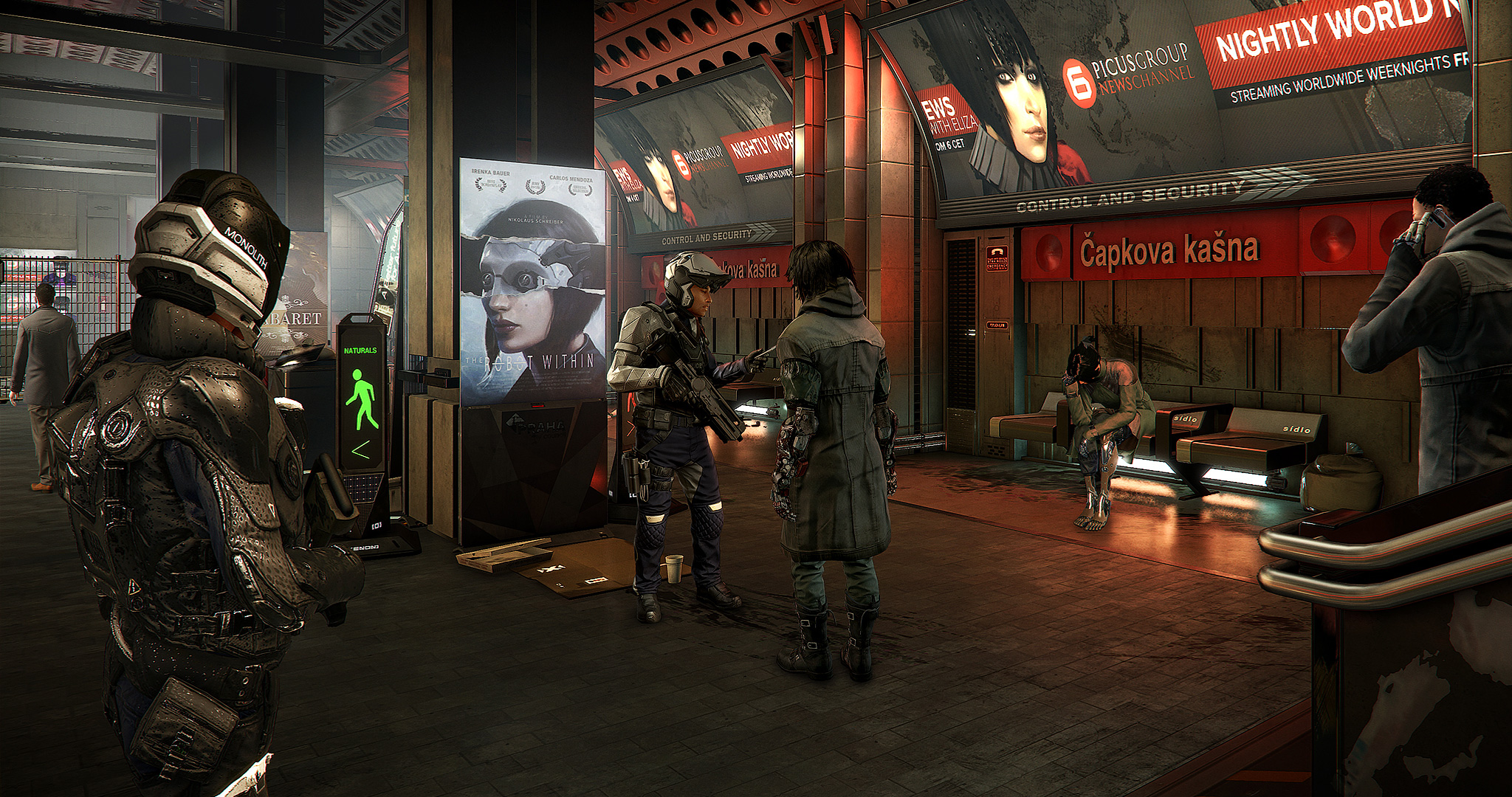 The fact is i experienced this while in a fictional game world and I can turn it off if things ever got that dire (they never did, but still). A large chunk of the population in the United States can’t simply turn off their life or reset who they are, they have to continually go day by day, week by week having to deal with unfair situations and treatment that they themselves, at their core, were not responsible for. I never expected to write a game review that stressed more on the themes of the game than the actual game itself but with everything that has happened in the past and what is still currently happening in our society it is worth mentioning. 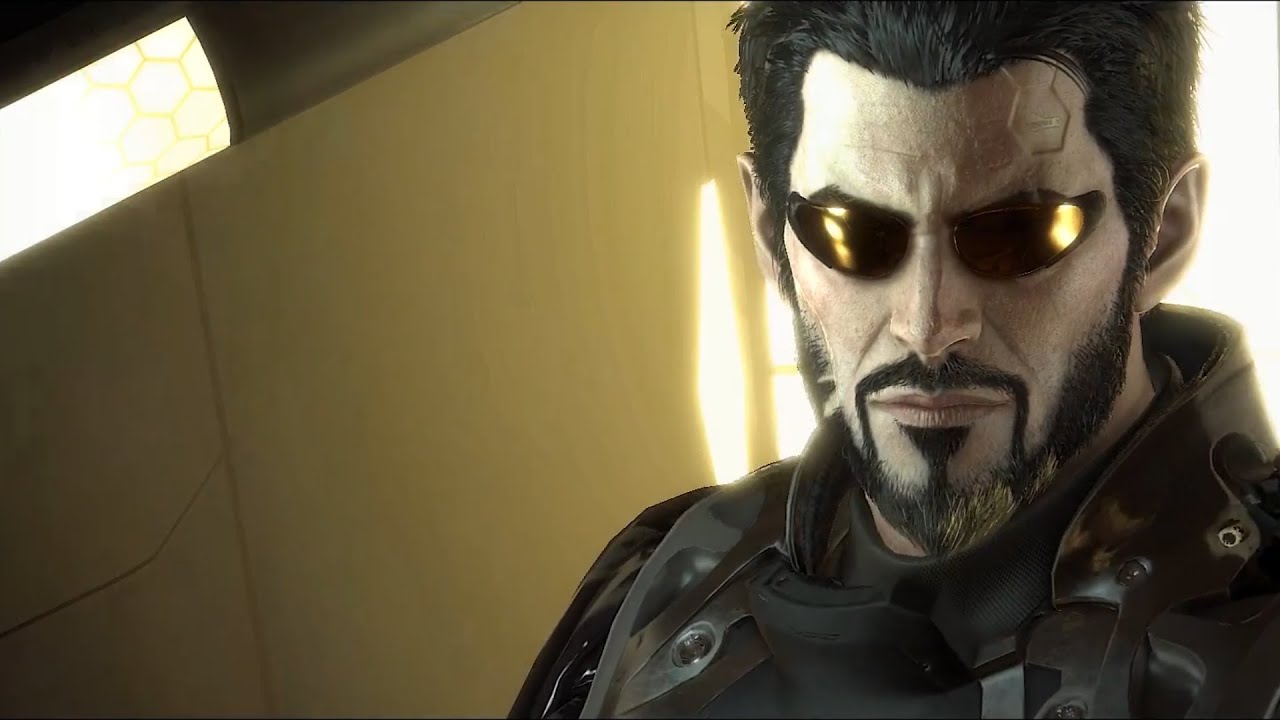 Overall Deus Ex: Mankind Divided is a solid game; it struggles with some plot issues and should have just attempted to mirror Human Revolution. It is still a beautiful game graphics wise and the gameplay is arguably the best in the entire series. The themes the game attempts to convey both succeed at times and fall flat; but the game still is able to display the core roots of the themes. Games like Deus Ex: Mankind Divided may not be the best games overall but they certainly attempt to tackle more complex issues/themes through interactive storytelling. Better games will come out this fall but i doubt any will attempt to approach such a topic as the treatment of second class citizens and discrimination. Needless to say you should play this game. *Deus Ex: Mankind Divided is available on PC, PS4 & Xbox One. This review was based off of the PC version.