Many expressed doubts that DICE would be unable to make a AAA game out of a World War I setting; some expressed that the old weapons simply would not appeal to gamers in the present. They were incredibly mistaken, Battlefield 1 is the best first person shooter experience I have encountered thus far on this console generation and here is why. The current first person shooter market is saturated with twitchy spray and prey shooters. Battlefield 1 by no means is not void of twitchy situations, but rather unlike Doom or the Infinite Warfare Beta, it does not rely on them to keep the players attention. 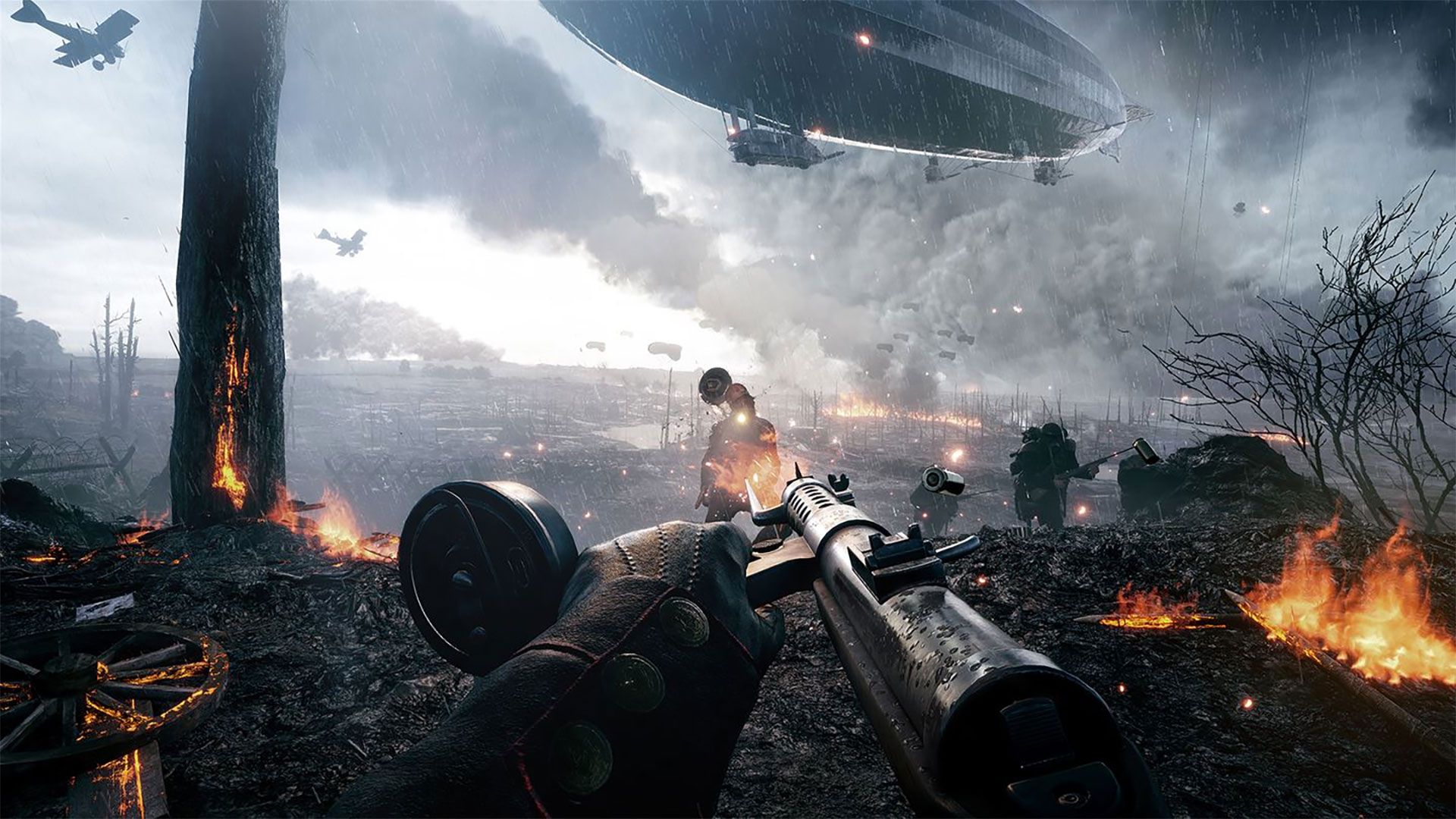 Gameplay aside, Battlefield 1 is a remarkable depictions of a war that occurred basically a century ago. The gritty, mud covered battlegrounds littered with bodies not only refuse to romanticize war as patriotic adventure, but rather depict a hellish landscape ripe with the dead and dying. The prologue in the campaign does an absolutely outstanding job of making the player feel insignificant and powerless. The player is given control of a member of the Harlem Hellfighters, better known as the 369th Infantry Regiment, an all black unit. The player is tasked with holding the line. Yet, unlike countless other games when the player dies their is no reloading of a past checkpoint or save file, rather a date of birth to 1918 is displayed with the name of a fallen soldier. Instead the game hot swaps the player to a different soldiers perspective; this continues for the entirety of the battle and excluding several scripted deaths, the life of the player is completely up to their own skill. I found this incredibly effective at proving to the player that no one is invincible, and that video games can depict war for what it is, and not as a cinematic Michael Bay esque experience.

Battlefield 1 follows up with the prologue with several war stories that follow multiple soldiers in different roles throughout the war. This is a departure from the ‘special hero soldier’ plot device that is used in other FPS games in order to put the player in a ton of awesome, cinematic scenarios. Rather the campaign uses the multiple protagonists much like the early WWII Call of Duty games to tell stories from various fronts during the Great War. These are not limited to a female Rebel in Arabia to a member of the Italian Army in search of his brother in the Italian Alps. What multiple ‘mini campaigns’ sacrifice in length they gain in worth and value. The game is not limited by killing off a protagonist or two so be warned. One can argue that the death of the player character simply adds to the reality of war, no one is guaranteed to survive. I found the campaign to be leagues ahead of past Battlefield games and oddly enough i beat it before even entering multiplayer.

Only DICE can make mud filled trenches and shelled out cities look somewhat beautiful. Battlefield 1 looks fantastic on my PC and runs incredibly well. Before the actual official launch I only encountered a single crash and I blamed this on my own hardware due to a heat issue I quickly resolved. The game does however use a large amount of CPU, my i7 6700k hit around 75-85% usage at times while my GTX 1080 seemed to just exist and not suffer at all. Nonetheless the game runs incredibly well for what it is doing. I read several angry redditors comments complaining that their i5 processors were being strained and that the game was unplayable since they could not play the game on ultra with a 1440 display. Some gamers obviously aren’t realizing all of the work the games’ engine and therefore your computer has to do in order to keep up with 64 players fighting on large scale maps while at the same time looking as great as it does. So of course an i5 may struggle to deliver this game on a silver platter.

The guns, maps, and player models all look as if someone toiled with them down to the digital strands of fabric on the khaki uniforms of the British soldiers. The attention to detail and the slight variances between different uniforms is a nice touch. This attention does no exclude the buildings in the game as well, it almost makes me feel bad for turning them to rubble with a tank or field gun. Lastly, the effect the weather has on the game is absolutely huge. Fog, clouds, or a sandstorm can all change how a match ends in multiplayer. It adds an element to the game that the players cannot control but rather have to adapt and overcome. For example, planes are pretty useless in a sandstorm (or fog depending on the map) bombing wise unless players are spotting targets on the ground. This changes the dynamic and adds to how players adapt on various maps. These are all fantastic  details that one would not notice had they not been implemented in the game yet it is hard to envision the game without them.

Multiplayer in my opinion has never been better in a Battlefield game. The new gamemode, Operations, is everything Battlefield 1 be as a gritty WWI shooter. The gamemode to series veterans is best described as the synthesis of Conquest and Rush. In Operations a map is split into sectors. Each respected sector has two points at the least (in some cases there are more). The points are labeled alphabetically. One team is tasked with defending the points from attackers that are given a certain amount of tickets that allow their team members to respawn. Vehicles and defensive emplacements are all tossed into the mix in most sectors. The end result is a progressive and rigorous gamemode that stresses cooperation on the attackers part. Combat is normally maximized or centered around key points or routes to certain points. This creates an incredibly close quarters setting and dynamic. Defenders will at time be fighting off attackers within 10 meters of their own position, at times even closer. Essentially this gamemode best allows for players to engage in trench combat or close quarters combat one may have encountered in WWI. The sub Reddit ( http://www.reddit.com/r/Battlefield ) has had nothing but praise for this gamemode besides some suggestions for balancing.

The 4 class structure returns in Battlefield 1 but with a catch, the kits have been altered to a degree. For starters the Assault kit no longer has the med kit, this has been given to a medic class. The LMG kit, Support now has the repair tool, mortars, and ammo. The engineer kit has been split up between the Support and Assault and the Recon/Scout kit is still overused by players solely playing for their kill to death ration and not the objective. I have several complaints. The Engineer kit that was featured in Battlefield 3 & 4 was a well rounded kit that excelled at engaging in close quarters combat with PDWs and Carbines while still being the best counter to vehicle threats. This is no longer the case; some of this is due in part to lack of several kinds of technology such as the RPG since it was not around during the time of WW1. 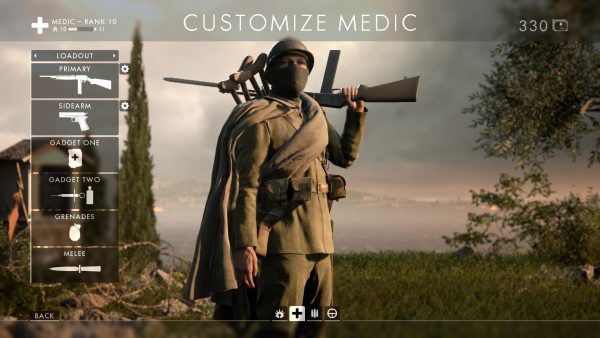 In other words one can argue that the class was changed purely because it would not fit into the historical time frame. The anti vehicle role, or better put the anti-tank role has been given to the Assault class: it utilizes powerful anti tank grenades and an AT-Gun. Yet, DICE gave this class SMG and shotguns instead of self-loading rifles. SMGs and anti tank grenades do pair well with one another yet by balancing logic the Medic has access to the self-loading rifle. I feel as if the Medic should have the SMG since reviving dead teammates typically requires the player to approach areas that are full of enemies normally within close quarters range. This works against the medic since the self-loading rifles are a mid range weapon and by being in a position to revive teammates they will be in close proximity with enemies. Basically I would much rather prefer if the Medic had access to a shotgun or had some sort of remedy to essentially the Support and Assault Class in close encounters. Other than that I have no other drastic complaints for the multiplayer besides some tiny complaints that will more than likely be addressed.

Conquest, Rush, the typical other gamemode and the new gamemode all play well to different degrees. The modes also all mesh incredibly well with the maps provided in the base game and I honestly do not have a map that i dislike to an incredible degree. Sure some aren’t perfect, but the majority of them all play and look incredibly nice. I personally praise the map design and departure from symmetrical map design. Vehicle combat is somewhat balanced, it is completely balanced if the team coordinates as a whole. The days of a single average player 1 v 1 ing a tank are over, that is what I am trying to get at. The gameplay and meta, or player environment is not the same as previous Battlefield games. This is not a bad thing.

Overall Battlefield 1 is both what one would expect from a Battlefield game and slightly not. I have up-most praise for the singleplayer and the multiplayer. It is by far the best shooter on the market at the moment that can appeal to not only the casual gamer but also the hard core demographic at well. Its treatment of WWI with up-most respect in the singleplayer campaign is a nice touch and is somewhat expected. I have no doubt i will lose countless hours to this game and its expansion packs. I absolutely recommend it.