Frantically jumping from seat to seat, the vertigo setting in, I panic as I make my way up the train. Everything inside the train begins tumble out the back into the valley below as the train inches closer to tumbling off with Drake inside of it. His leaps become more sporadic and desperate as the realization of the dire situation begins to fully sit in. After several more heart stopping leaps of absolute faith I make my way off of the cliff face onto relatively solid ground. This retelling of one of my favorite moments from Uncharted 2 in the Nathan Drake Collection.

The Collection follows, the charismatic adventurer and thief, Nathan Drake on three escapades that lead him and his friends (and enemies) across the world. The Collection itself is actually three games remastered through the same engine Naughty Dog used in The Last of Us when it comes to visuals. The three games remastered are Uncharted: Drake’s Fortune, Uncharted 2: Among Thieves, and Uncharted 3: Drake’s Deception. All three of the games have an average Metacritic score of over a 91/100 and Uncharted 2 was the official Game of the Year in 2009. Uncharted 3: Drake’s Deception was given perfect scores from IGN and Gamespot.  Overall these games are action packed almost cinema esque adventures. Yet, what makes them stand apart from the average action adventure game?

Naughty Dog, the game’s developer is no stranger when it comes to making noteworthy franchises. They in fact are one of the few developers that has made noteworthy games in three completely different genres. Crash Bandicoot was a phenomenal platformer on the PS1 and PS2. On the other end of the spectrum The Last of Us cleaned shop and won Game of the Year for being a story driven survival-horror game and is regarded by many as being one of the best games ever made. Uncharted at its core is an action adventure third person shooter. However, it also has fantastic platforming puzzles and over the top cinematic gun play experiences as well. Yet, it accomplishes this in a light hearted manner. Not a single Uncharted game has been rated M for mature audiences (although the upcoming Uncharted 4 might be). All of this is combined with perfect voice casting and acting. Nolan North absolutely lives this role when it comes to his performance as Drake. The characters in this series ranging from the father like figure Victor “Sully” Sulivan to the witty journalist and love interest Elena Fisher are also all expressed through expressive performances. The Villains in general are well written. So just from a story perspective, the series has an incredible advantage over other games in the genre.

Now to break apart and describe the various kinds of gameplay one will find in this collection. Each game does a fantastic job of incorporating a controls tutorial into the actual story in each game. For example, the basic mechanics of how to climb and maneuver a 3D spectrum are introduced to the player while they are attempting to climb out of the cliff side train in the opening scene of Uncharted 2. Climbing, whether it be inside an ancient monastery in Nepal to a warehouse in London, inhabits a large portion of the gameplay. Puzzles at times have to be solved through jumping to specific points in a ruin that would be unreachable by any other means. Shooting mechanics are also added to the climbing functions. One moment Drake may be climbing up the side of a burning apartment building in Nepal and may need to shoot a mercenary from the ledge of said building. It shouldn’t have to be stated that Drake cannot wield a two handed weapon such as an AK47 or a M4A1 during these encounters but I felt like I should at least leave that tip in here. The climbing portions and verticality of what would be tedious single planed environments in other shooters is essentially refreshed with the ability to scale the environment in order to get the drop on your enemies. 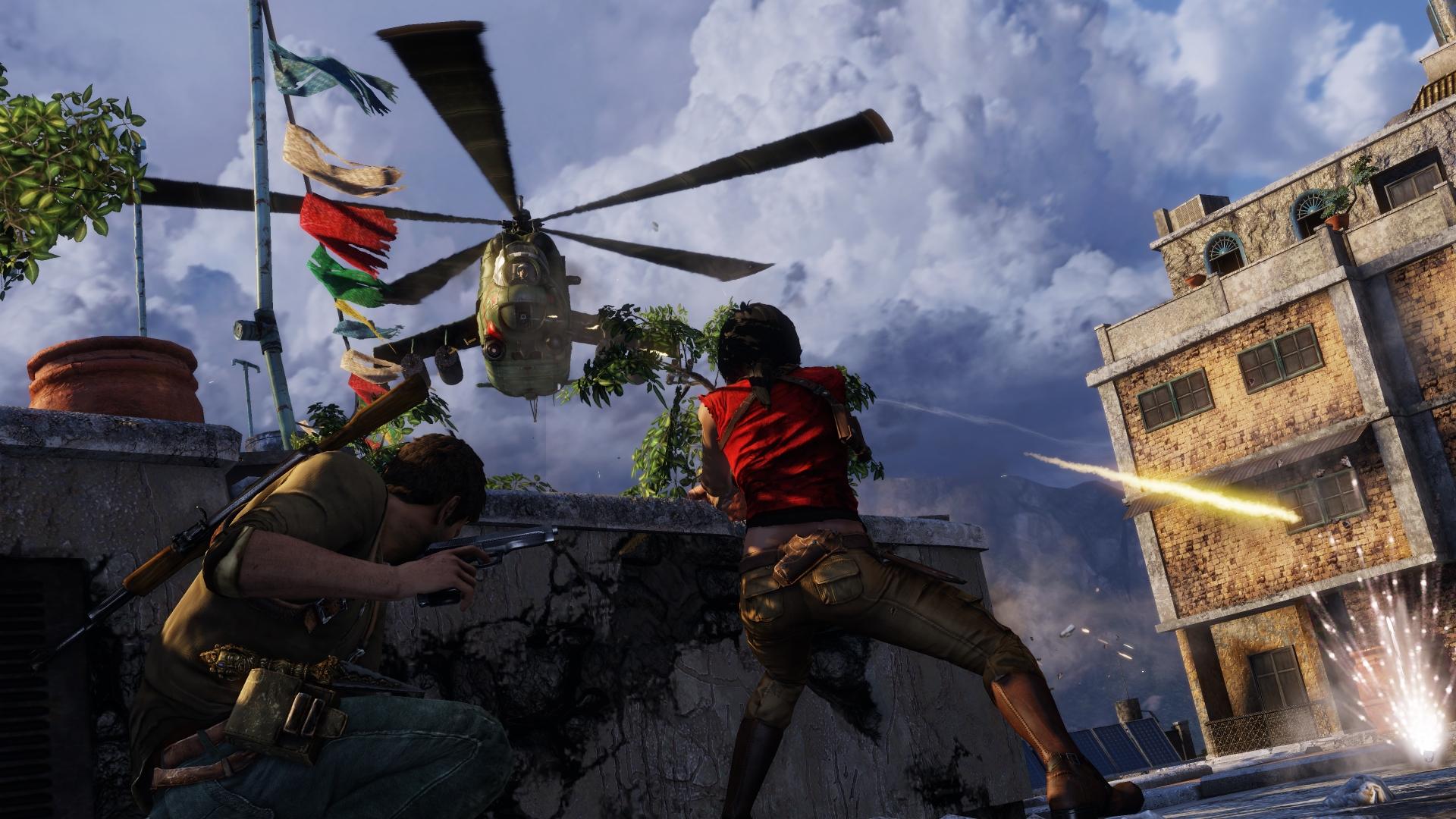 The moment to moment gameplay centers around run and gunning from cover to cover. As stated earlier, these do not suffer from being repetitive due to the added verticality in the games. You are never simply fighting enemies on a level environment. This is thanks to the level design and creative directors at Naughty Dog. The screenshot above is from Uncharted 2: Among Thieves during a boss battle with a Hind Attack Gunship. Most games would put the player in a courtyard or inside a building. Instead this fight takes place on several burning rooftops in a city in Nepal. The player is forced to frantically jump from building to building, utilizing any weapon they can find in order to take down the chopper. All while dodging gunfire from not only the chopper but also rooftop enemies. The weapons themselves in these games are what one would expect in an adventure game of this genre. The player has the ability to pick (in many cases off the corpses of enemies) weapons ranging from simple nine millimeter handguns to RPGS and Grenade Launchers. There are also usually a variety of each class of weapon Drake may find. In other words there are normally two to three different kinds of assault rifles or pistols to pick from. Some players may favor a classic revolver that deals a lot of damage but lacks ammunition capacity. Others may prefer a semi automatic Colt .45. The decision is up to the player and will drastically call for different play styles. However, the game does force players to part ways with their preferred weapon sometimes during specific encounters. For example you simply cannot beat a tank with an assault rifle, so you are forced to use an RPG. These moments feels necessary though, so I personally did not mind them that much.

Visually, all three games look fantastic. Obviously the best change visually from the original to this remastering is the graphical upgrade for Uncharted: Drake’s Fortune, the first game. Seeing Nathan Drake being rendered through the same process in all three games in the remastering truly blends all three games into a seemingly transition-less story. I find it enjoyable to play several chapters in each game without really noticing any basic changes to the graphics. The special effects from everything from an explosion to the candid torchlight deep underground all seem incredibly polished and organic. Organic in the sense that the effects seem to be all unique in the specific encounters. An explosion inside a cave simply doesn’t behave or look the same as an explosion that occurs on top of a roof. The sounds design in the game is also incredibly noteworthy. I find the attention to detail, such as the ringing that occurs after an explosion that goes off in close proximity to Drake a nice touch to theses games that sound and look almost like a movie. I can best equate these games to a modern take on an Indiana Jones style adventure game.

The Uncharted series is a must play franchise for any player new to the franchise or a series veteran that seeks a nostalgic trip through incredible set environments and intriguing stories. The franchise has literally never looked better. The shere amount of content a player recieves for $60 is an absolute steal. Three outstanding games that received countless awards for the price of one, who honestly wouldn’t want to play these fantastic games found only on Playstation? I personally cannot wait for the next iteration in the series: Uncharted 4: A Thief’s End which comes out next spring but until then, this Collection will suite my cravings for the franchise.