Some developers (and publishers) tend to beat a franchise to death, milking it for every nickel and dime is it worth. This normally leads to a game series ‘death’ in a sense. So when developers announce that they will be concluding the series with one final title, the response from the public is always mixed. One camp doesn’t necessarily want something that they care about so incredibly much to end but understands that things move on and end. The other camp is simply too naive to realize that everything ends; and if it doesn’t it more than likely will grow into a game series that is completely alien to its core ideas, gameplay aspects and narrative of the original. I find myself nearly always with the first group of people. Naughty Dog had the fortitude to realize that the Uncharted series and its main character Nathan ‘Nate’ Drake deserved a well put together ending. I will easily put Uncharted 4: A Thief’s End among the best final chapters in a game’s series; here is why.

For those not aware of the entire franchise and story, the series follows Nathan ‘Nate’ Drake. He can best bed described as a modern day Indiana Jones without the whip and fedora (My entire recap and review of the first three games can be found here). This game takes place several years after the third game, Drake’s Deception. The charismatic and likable Nate has apparently retired from the life of pursuit of treasures and lost cities. He has in fact settled down and got married to Elena from the previous games. While working for a salvage company, one in which Nate is the leader scuba diver, he is approached by his brother Sam (VA by Troy Baker). Nate had believed that his brother was dead, killed while they were undercover in a Panamanian Prison looking for Captain Henry Avery’s treasure. This is how the game begins excluding a boat chase on the high seas in the Indian Ocean that acts as a tutorial. This bundled with a movement tutorial that takes place during Nate’s childhood at an orphanage rounds out the beginning of the game.

Sam explains to his younger brother that he, in fact, survived being shot while at the Prison and recently escaped. The problem, and the reason why Nate abandons his sedimentary lifestyle is that the man that broke Sam out was a drug lord imprisoned next to him. Hector Alvarez had constantly heard Sam ramble on about Captain Avery’s treasure and how he knew where it was. So when Alvarez broke out he managed to get Sam out as well on the condition that he bring half of Avery’s treasure to him. If he fails in doing so after a period of three months Alvarez’s men will kill Sam. This plot device allowed Naughty Dog the chance to pair arguably the two best actors in the video game industry together. Nolan North playing Nathan Drake alongside Troy Baker’s Same Drake just feels natural even though the latter character hadn’t been mentioned in the other games since he apparently died 15 years ago and Nathan move on. The chemistry between the two actor’s performances makes the two characters feel like actual real life blood brothers. For the majority of the game, Nate is alongside Sam, their banter and joking behavior with one another does not feel scripted in the slightest degree. The writer’s choice to use Sam as a tool in order to explain the past three games to the player through Nate keeps new players from being out of the loop for the past stories. Nate consistently refers to past adventures and explains them to Sam while they trek across the world for Avery’s treasure. This may feel a little repetitive and directed towards veteran players nostalgia of the past games yet at the same time, it is informative and at times usual for the plot to advance.

What literally makes this game stand out from others is the wide variety of environmental set pieces and the visual presentation of the game. Uncharted 4 arguably is the best looking game on the market when it is broken down into art design and graphical presentation. For example, the foliage above combined with the dilapidated structures of this forgotten pirate Colony convey the passage of time and abandonment of this settlement incredibly well. Each tomb, town, island, etc all are incredibly well put together. This, of course, is important to have since this game ends up being a globe-trotting adventure. Basically, all of the environments look believable, nothing in the game looks to flashy but at the same time isn’t muddied down or bland. Environmental hazards or conditions such as rain or the explosion of a convenient red barrel all have an impact on the presentation of this title. Naughty Dog even managed to make mud look good in a way. I won’t spoil as to how but Nathan get incredibly dirty at times, covered in filth and grime. If the game had awful gameplay in my opinion it would still be worth eventually playing thanks to the diverse and well put together environments and the optimized graphics.

Like the other titles in the series, Uncharted 4’s gameplay is split between third-person action sequences, littered with fantastic explosion and predominately balanced by basic gun play. The other half of the gameplay found in this series presents itself through puzzles in ancient settings (tombs, ships, caves) and the overall traversal of the actual in game environments. At times a cliff face and how the player will traverse it can be a puzzle. In Uncharted 4 however, Nate has a grappling hook which acts as a double-edged sword. It can make traversal of these environments easier, but the hook and swinging mechanics have also opened new doors for the developers to make more difficult puzzles. None of the puzzles are particularly hard per say, but they can take a while to either solve or transverse. This, of course, depends if it is literally a puzzle (pictured above) or rather if it is the act of climbing a hazardous cliff side in Scotland.

The various character one will encounter, such as the two villains above, are all incredibly well written. All of them have layers or levels to their personality along with their goals and intentions. Rafe Adler (the man in the tuxedo above), comes from an incredibly rich and successful family. At the time of the game, he runs his parent’s inherited business but wants to make a name for himself and break away from his parent’s shadow. To him, the vast amount of wealth that would coincide with discovery Captain Avery’s treasure is unimportant. While Nate and Sam seek fortune, Rafe is searching for fame. So he has been using his wealth to employ the Private Military Company named Shoreline, headed by the woman on the left in the picture above: Nadine Ross. Nadine, unlike Rafe, is only interested in the money Rafe is paying her and her South African PMC. Although the idea of finding the treasure does indeed interest her, she is nowhere near as devoted to the search for it as Rafe and the Drake brothers. She is far more interested in running the PMC she inherited from her father, this reflects her characters behavior and morals in the game.

Victor “Sully” Sullivan makes an appearance in Uncharted 4 as well. The veteran thief and mentor to Nate have been keeping busy still continuing to be a thief despite his age. His role in the game of being Nate’s sidekick during gameplay has been replaced by Sam. He is still quite present in the game but partakes in a more supporting role. Elena Fisher, now Elena Drake, appears in the game and is essential to the subsidiary plot of the game. To sum that bit up Nate goes off on the adventure but tells Elena that he is actually going on an international salvaging mission in Malaysia. This lie as a whole divides Elena and Nate for part of the game but as one can expect she forgive him since he is basically doing this for his brother. The writing, especially near the end of the game, suffers from incredibly slow pacing at times, but overall the pacing was on point.

Lastly, the gunplay is easily the best in the entire series. Reloading is now triangle on the controller but I grew accustomed to that quickly. The one complaint I have for the basic combat system is the ability to hold only two weapons. At the same time, I must compliment Naughty Dog for implementing slings for all rifles. This added to the realism since the rifles no longer float behind Nate. This pistol holster and the attention to detail when Nate physically switches weapons has clean and fluid animations that do not detract from the already stellar gameplay. The cover system has been overhauled, or at least it feels that way. It feels and plays a lot like Naughty Dog’s other game The Last of Us. Well, the cover system is like The Last of Us; the pacing is quicker when it comes to combat. Movement is far more important when engaging enemies. Otherwise, you may find yourself flanked because you were attempting to hold up in a single location. I won’t go into detail regarding the gameplay because the game, for the most part, plays like the other’s but is more precise and smooth. Also, the main focus for all of these games is the story and overall narrative. The third person combat is by no means anything unique but it isn’t bad either. Yet, when this gameplay is combined with blockbuster-esque set pieces and grade-A acting a fantastic masterpiece is created. 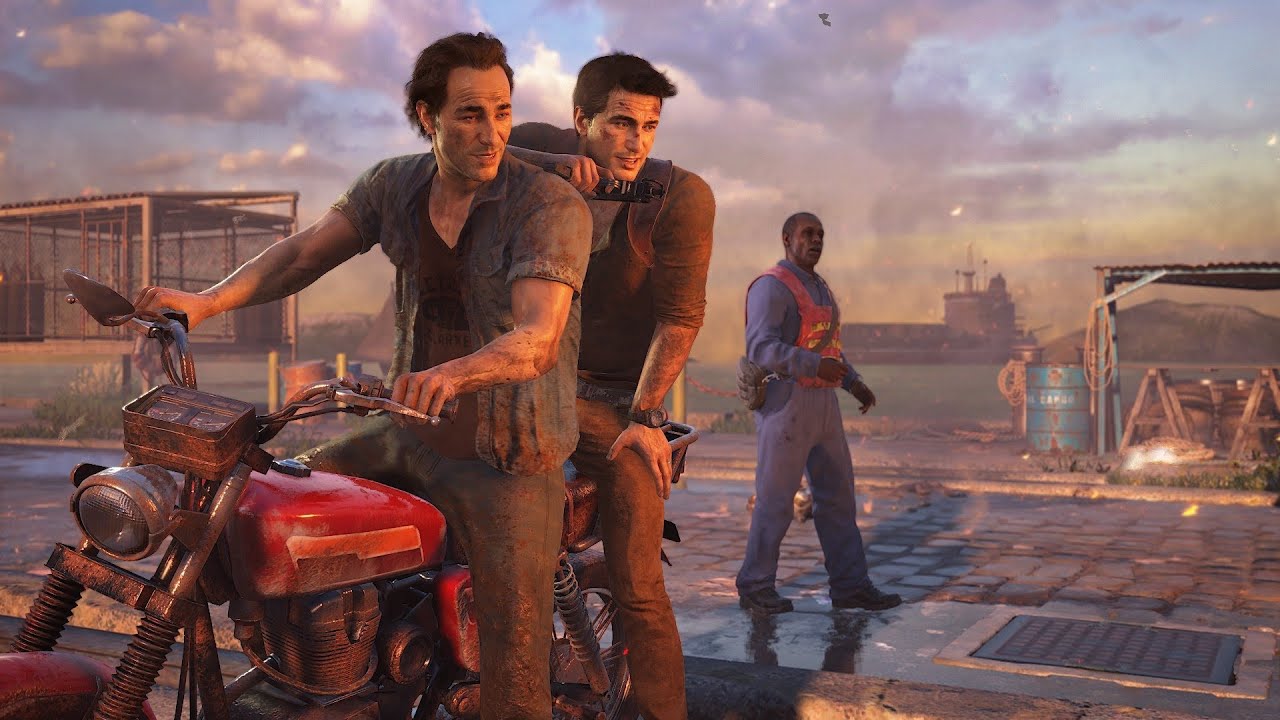 Overall I found my time spent playing the story mode in Uncharted 4: A Thief’s End incredibly enjoyable. I was not able to play a lot of multiplayer since I had to quickly begin to play Doom for the next review. The story without going into detail or spoilers territory the game has a solid bookend ending. There are no cliffhangers and every single plot line is either ended or shifted into the greater meta of the story. What I am trying to say is that I could not ask for a better ending for this series. Although it does leave some room for the franchise to expand, Nathan Drake’s story or at least his adventuring has come to a close in an absolute fashion. I wish I could go into further detail but that would spoil the ending and its epilogue. I am personally pleased to hear that Naughty Dog is claiming to be finished with the series; Uncharted 4: A Thief’s End is the pinnacle of an award-winning series.